Have you ever dreamed to see one of the new wonders in this world? But two – in the same year?

One in Peru: Machu Picchu, and one in Mexico: Chichen Itza – these are two of The New Seven Wonders of the World that I was lucky to be able to visit last year, in 2019. Although there is no link between the N7W initiative and UNESCO, both sites are part of the UNESCO’s World Heritage List, due to the scientific and educational purpose.

Built in the mid-15th century by emperor Pachacuti, Machu Picchu remains a wonder on the eastern slope of the Andes Mountains. The amazing architecture, the walls and terraces do still intrigue the people, how this famous settlement was built in the middle of the mountains.

Chichen Itza was built much earlier than Machu Picchu, around 5th century, but with a smaller pyramid. It flourished around 13th century, when the bigger pyramid we see today was built atop of the small one. One of the largest Maya cities, it probably had the most diverse population in the Maya world, a factor that could have contributed to the variety of architectural styles. 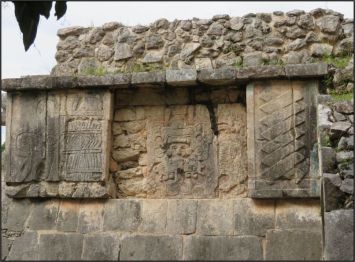 Inca Empire was the largest empire in pre-Columbian America. The administrative, political and military center of the empire was located in the city of Cusco. The Inca civilization arose from the Peruvian highlands in the early 13th century.

The Maya originated around 3,000 years ago, and covered a third of Mesoamerica, in present-day Guatemala, Honduras, Belize and Mexico. Mayans knew a different political complexity than Incas, that included states and kingdoms. They developed their first civilization in approx. 1000-2000 BC, with ups and down during the centuries. Researches and interpretations do still continue today, as not much written evidence was found. Earlier this year, March 2020, archaeologists say they found the long-lost capital of an ancient Maya kingdom near the border between Mexico and Guatemala: Sak Tz’i.

The ruins of Machu Picchu, rediscovered in 1911 by explorer Hiram Bingham, are one of the most beautiful and enigmatic ancient sites in the world, reason the site became an UNESCO World Heritage Site since 1983. Meaning “Old Mountain” in Quenchua language, the site, built 80 km northwest of Cusco around 1450 by emperor Pachacuti (same who built Ollantaytambo), still has a lot to be discovered, or interpreted, beside the existing legends. Either for military purposes, or as ceremonial site, the city is split into two sectors: an urban sector and an agricultural sector. The eastern section of the city was probably a residential one, with many houses, storage rooms, baths, palaces, and the western part was ceremonial, with palaces, temples.

At an altitude of 2,430 metres, in the middle of a mountain area, Machu Picchu is located above a bow of the Urubamba River, which surrounds the site on three sides. Moreover, located on a saddle between two peaks: Machu Picchu and Wayna Picchu (where the Temple of the Moon is), the city looks like it was having a military purpose. But other interpretations suggest that this was a final place of a longer pilgrimage route starting from the Island of the Sun in Lake Titicaca (where the Inca creator arose from) along Inca Trail, and ending to Intihuatana stone, one of the most important ritual stones in South America.

Little is known of the social or religious use of this site during Inca times, as much of the origins and whole life of the Inca is still surrounded by mystery and mythology. But striking is the artistic architecture with spacious windows, niches for idols, remarkable terraces, and unique water channels, all built on a remote place, a steep terrain, without the use of draft animals, or even the use of wheels. A masterpiece of art, architecture, and engineering, in perfect harmony with nature; the most important legacy the Inca civilization left to mankind. 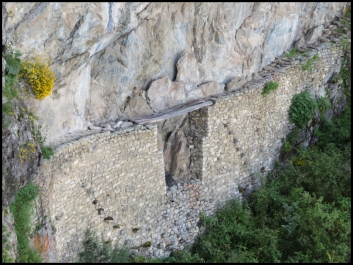 Hidden from below the mountain, it is an architectural marvel how this little fortress has been built: the walls, the terraces, or the buildings. Carved from the local mountain granite, they are fitted together with an amazing precision, using a technique called ashlar, in which the stone blocks are cut to fit tightly without using mortar. This is the same style, similar with the buildings we’ve seen in Ollantaytambo or Cusco.

Located in the Eastern part of Yucatan state in Mexico, Chichen Itza is mostly famous for the great pyramid Temple of Kukulkan, or El Castillo. But actually, the site is a full city, with many temples, platforms, baths, ball courts, sink holes (cenotes).

The Maya name “Chichen Itza” means At the mouth of the well of the Itza. Or another possible translation for Itza is enchantment of the water.

The site contains so many buildings one can barely see in one visit, connected with paved pathways. The buildings were originally painted in red, blue, green and purple, but only few shades of colour can be still seen today.

Various buildings are built in different styles, either for military purposes, but mostly for ceremonial purposes. The city is grouped in few sectors: The Great North Platform, The Osario Group, and the Central Group. We only had time to visit the Great North Platform, which includes the Temple of Kukulkan, Temple of Warriors, the Great Ball Court, and few additional platforms.

The most famous sink hole is the Sacred Cenote (Cenote Sagrado), known as “The well of Sacrifice”. It is located a several hundred metres from the Temple of Kukulkan, and it is known for the human sacrifices that were made. It is said that there is a hidden cenote under Kukulkan, yet to be discovered.

Same as Inca culture, Maya also sacrificed objects and humans as a form of worship to various gods.

We got the same entertainment in the Great Ball Court, as clapping and whistling make a funny echo. Different interpretations were given to us, as what sounds the ball leaders would make to be heard by the other participants to the game. Several ballcourts were found in Chichen Itza (as this ballgame was very famous to all Mesoamerican regions), but the Great Ball Court is the biggest (166mx68m) and more impressive. 8.2 metres high walls with big stone rings, sculpted panels with ball players, and other motifs show not only an artistic architecture, but also it depicts the Mayan life in this area. Even though Mayans created a very sophisticated written language, the Mayan world is still enveloped in mystery and mythology since very little records were found. 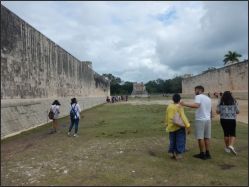 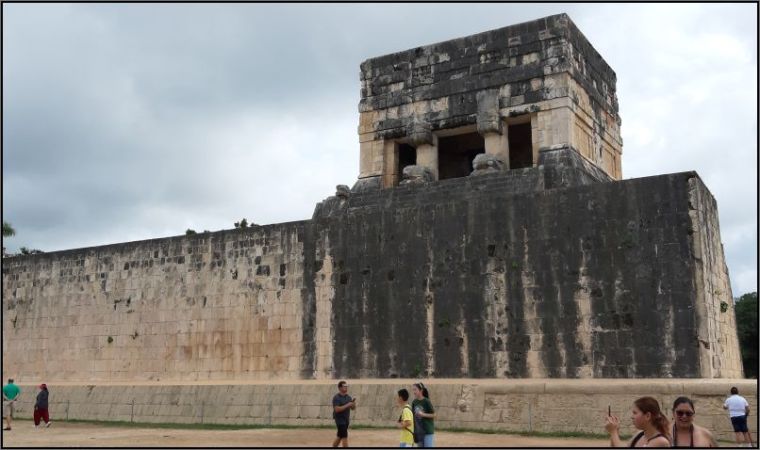 We always prefer to travel independently, as it gives us more flexibility to choose where to go and how long to stay. When we make plans and draw our own route, we have in mind certain stops along the way. The benefit of travelling independently is that you can always change that, or adapt your stops as you wish, vs travelling with a group when you have certain stops, and limited time for each of them.

On the other hand, when you travel by yourself, you need to have your lessons done if you really want to learn something about the places you see, or the history of them. The good side having a group tour is that there is always a guide who is offering (more or less) valuable information, and you can always ask more questions.

We traveled independently to Machu Picchu, and took our own time to see the whole site, even though some areas were really busy and we had to follow the line.

In Mexico, we traveled with a group instead. The bus tour took us about 3 hours one way (since we’ve had our base at a hotel on Riviera Maya), and it didn’t let us have too much time on the site. The pro was that we didn’t have to worry about anything for the day, while the cons was that we spent way too much time on some other unnecessary stops while we could see more of the actual site.

How do you like to travel? Independently, or in a group tour? I would love to hear from you!

Wishing you a safe and healthy year ahead, hope we can all travel again soon!!