How to Peru in 2 weeks, Day#5: A day trip to Maras, Moray, and Chinchero

Dragging a foot after the other one is not a problem, if I can only get a grasp of air. My heart is racing like crazy, trying to pump more air. Thin air. I can’t believe how quickly my heart rate went up after not more than 20 stairs. I suddenly realize what our driver told us in his broken English about an hour ago. Chinchero is our highest point of the day, over 3700 metres altitude. Like a miracle, a bench appeared in front of our eyes, but we still have to climb few more stairs. I only have to keep moving, a step at a time: four, three, two, one. I almost collapse on the bench, trying to stabilize my heart rate: breath in, breath out, breath in, breath out..

On our first day in Ollantaytambo we had made arrangements through our host for a day trip, to visit the surroundings. With only few Spanish words from us, few English words from our host, but with a great technology, the offline translator app, we managed to get a car and a driver to get us to few of the interest points from our itinerary. The day trip can be done either from Cusco, but it is a “must” from any direction: Moray, Maras, and Chinchero. We needed a full day actually, and I considered lucky, since our driver took us on the side roads. Even though they were bumpy and dusty, the views we were offered were unique.

We got a glimpse of the Sacred Valley on our way from Cusco to Ollantaytambo, but this time, from the top of a hill where our skillful driver had the kindness and knowledge to stop by, we could see where the name “sacred” came from. With rich valleys, and white peaks, we could feel the peace in the air. We learned from our driver that there are a lot of crops during the year, and they cultivate the land based on the altitude, using each altitude level for a certain type of culture. He kept honking before every sharp curve despite the appearance of a deserted place. (I realize now that this is a Peruvian habit, similar thing happened with drivers in Lima). If it wasn’t for the rugged road, I would say we are lost. If it wasn’t for a lonely tractor working the land, I would say we are in the middle of nowhere. We found out later that “nowhere” is very often met in the rural areas, especially in the southern parts of Peru, where the poverty is touchy and the distance has a different meaning. 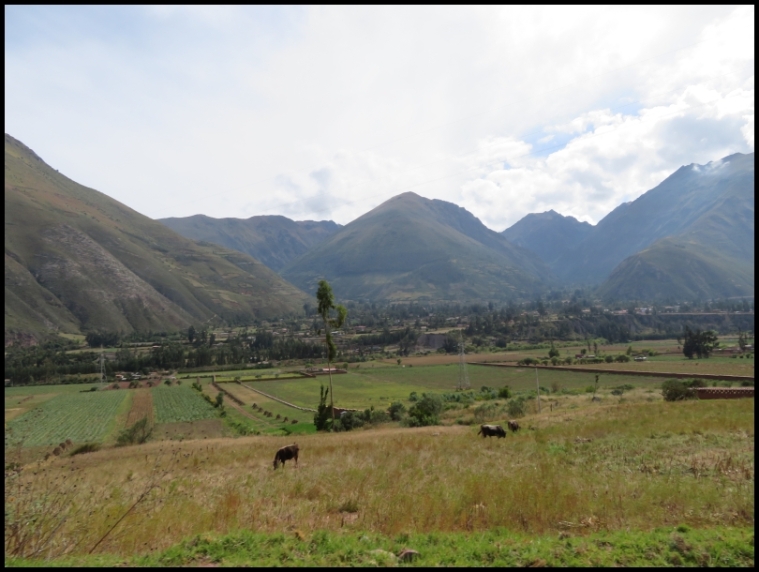 Since pre-Inca times, the salt has been obtained in Maras (3,380 m) by evaporating salty water from a spring stream. The flow of the water is directed through an intricate system of channels toward about 300 terraced ponds. Almost all ponds are less than 3-4 m2, and very shallow ~ 10  to 30 cm in depth. 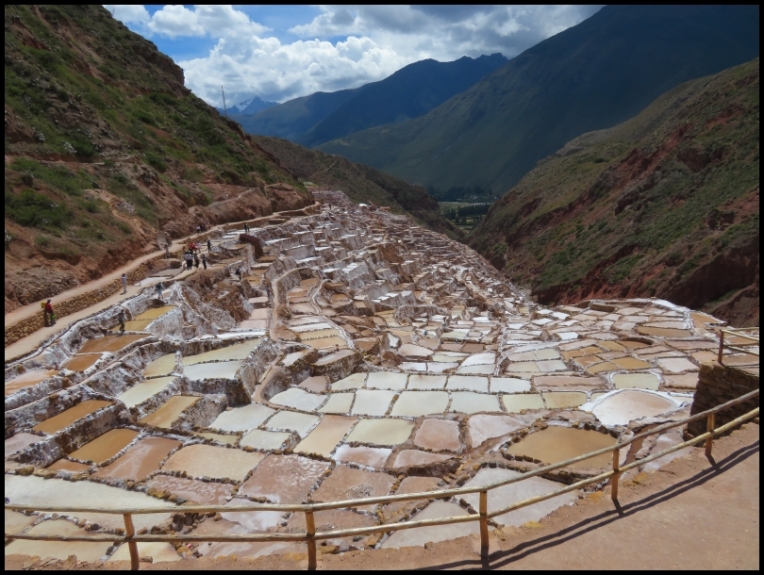 A myriad of little channels are spreading out through the hundreds of the ponds that lay down on the mountain versant. We could see some locals tending to some ponds, stomping the muddy bottom, or re-building new walls.

When the water evaporates from the ponds, the salt starts to precipitate and crystals start showing up on the water surface, or on the pond edges. Color of the salt varies from white to pink, and is gathered in big bags to be sold later, as artisanal salt, gourmet, blended with herbs, or other spices. All ponds are tended by hand by local families during the dry season: April through November. 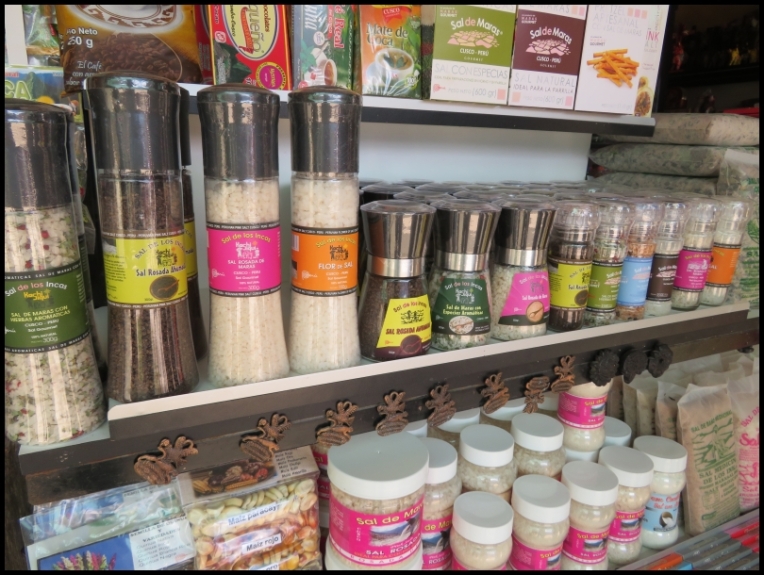 Moray is an archaeological site approximately 50 kilometers northwest of Cusco on a high plateau at about 3,500 meters, west of the village of Maras. The site contains unusual Inca ruins, mostly consisting of several terraced circular depressions, the largest of which is approximately 30 m deep.

As with many other Inca sites, the purpose of these depressions is uncertain, different archaeologists and scientists are still researching and guessing the full meaning. This landmark was likely used for farming, and soil samples have shown that soils were brought in from different regions to be used in helping grow different crops at different levels of the terraces. It is not only an agricultural laboratory where they were probably compare and analyze how different crops grow at different levels, but also, like all other Inca sites, there is a rectangular area in the bigger depression supposed to be used for religious rituals. 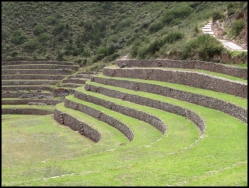 Between two vendor’s calls of chompas y chullos (Andean sweaters and hats), and before we digested our fresh impressions, we arrived shortly in Chinchero. The first stop was at a private “museum” as our driver was trying to explain, where we learned how alpaca wool is processed, from the moment it is picked from the back of an alpaca, until the moment when the scarves, hats and sweaters are good for selling. The lupine fields we’ve seen in the outskirts of Chinchero explained now what the blue is made from. We have learned now of different plants they are used to dye naturally the wool. I was impressed how the cochineal insects are used for red colours, these little bugs that are actually a disease for cactus.

Then suddenly we found ourselves with our heads and hearts pumping out loud, while walking up the stairs to the ruins in Chinchero, where also the Church is located.

After a short rest on the bench appeared to be put in the right place for tired visitors like us, we visited one of the oldest churches in Peru, built by the Spanish conquistadors in 1607. Like all other main churches across Peru, this one was built right on top of an existing religious Inca site. Inside, we joined a group with their tour guide, and a question from one of the visitors triggered me some similarities with the native culture from Canada. Someone asked the guide why the Spanish had built the church right on top of their religious and royal Inca site. His answer was that the Spaniards built them just because these sites were full of good energy, which they wanted to pass to the new religion. Can’t deny this was one possible reason, but honestly, what was the easiest way to replace the existing religion with the Catholic one? Of course they wanted to erase the old places where Incas were worshiping, or would continue to do. This was a simple way to convert them to Catholicism, and built the Church of Our Lady of Montserrat. While the interior of the church has many frescoes and paintings, the altars have a unique Andean baroque style. Both the interior and the exterior deserve some rehabilitation, but the originality strikes anyone put his or her foot inside. The 22 karat gold gilded altar is shiny as new in 1607, even though the surroundings are visible stating their age. We were lucky about the guided tour we found inside of the church, and gladly participated in a short history lesson. So we learned that all main Inca sites and palaces around Cusco (especially) have been replaced with first catholic establishments in this area, this one being one of the oldest churches in Peru.

Tired, but happy we arrived around 5 pm back in Ollantaytambo. And with a headache. Starting while we were on top of Chinchero hill, my headache got worse during the way back to our home base. A couple of pills and more coca tea released the pressure for a short time, but the headache came back overnight, stronger. After an almost sleepless night, the morning found me with many questions and worries..

*Ensure you walk at your own pace. Having some water, good shoes, as many breaks as needed, and a proper breathing would help to climb the steep sites.

*Having some toilet paper or tissues with you might save your day, as not all facilities have paper (or water).

6 thoughts on “PE, Sacred Valley: A day trip to Maras, Moray, and Chinchero”