Second morning in Lima found us asking the street vendors for some change near the Ricardo Palma station in Miraflores, where we had to take the Metropolitan bus to Lima district. Taking another public transportation was out of discussion, as we couldn’t manage to deal with the chaotic system of private (mini)buses. Since this was The Palm Sunday, grabbing a cab was also out of discussion because Arequipa Ave is closed as every other Sunday, which left us to the only rapid and easy solution to take the Metro, a rapid bus that runs from Barranco district up to Lima district in North. Purchasing a card for a ride would double the cost of it, but the need of more change was more of an issue, since we had to have the exact amount of money for the vending machine located at the entrance of the platform. Since no street vendor was willing to spare their change, we decided to ask a local to swipe their prepaid card and let us enter one by one. Offering an extra sol, and using the international sign language, we kindly asked a lady with her son to help us enter the gate while showing her the 6 soles for both of us. Glad we could resolve so easy the issue of getting in, we headed to the front of the bus to have a full view of the route. In about half an hour we arrived in Lima district, not before acknowledging the fact that we would never dare to drive a car in Lima, after watching the drivers’ attitude and recklessness on the streets.

When we booked our trip we didn’t realize we would be in Lima on Palm Sunday, or what the day really means for Limenos. Crazy traffic, polluted city, we only found later that Lima has about 11 million souls to live in. Lima district had some surprises for us, and the most important one was that the whole city was celebrating. Accordingly with our host, about eighty percent of population is Catholic, which answered my question why so many people were in so many churches. And when I say many churches, I need to confess that the historical area of Lima district is the place with most concentration of churches per square foot I have ever seen.

Peruvian Catholicism followed the syncretism found in most of Latin American countries, in which the native rituals have been integrated with Christian celebrations: the best way to conquer a new world.

We found ourselves immersed in a local celebration of Christ, different festivities taking place in different spots. Needless to say that all churches near Plaza Mayor were full of people attending the special Mass from Palm Sunday. Spotting a big board with a special route for Semana Santa, and seeing the list with events for the whole week made us wonder when and how their beliefs have been built and develop along the centuries. Were the Spanish conquistadors who enforced the Catholicism over, when they conquered these lands, or the need of worshiping came from ancient times?

Catholic Churches have a simple interior, decorative speaking, more or less. Beside the huge flock of people praying and listening to the Mass, the adorning figurines representing different saints or important Catholic/local personalities captured my attention first place. The intensity that people were praying with, in all churches, or at a certain saint, was also something that deserves respect in all aspects.

Sometimes the tourists intrude in the day to day life, and rituals that locals might not agree with, but we can’t help in certain situations. I personally would have preferred to visit these places in a quiet day, to let my senses float around with a peaceful pray. Instead I got drifted from a church to another one, trying to keep the pace with other visitors.

The middle of the day caught us between the churches we had on the list to visit and some side alleys admiring the buildings’ intricacies. Our host reminded us that noon is the guard change time at the Government Palace, and we hurried to get a good position in front of the gate and listen the army band playing different rhythms while few guard units started to provide a show for us, the novices across the fence, as well as the presidential family who was watching from the palace windows.

A long show on the palace premises with an excellent play from the army’s band was overlapping actually the ongoing mass which could be heard all over the Plaza Mayor through the loud speakers echoing far away.

We eventually got bored, not being able to understand the mass, nor to hear properly the band. Tired from the restless sun that was brightening the whole plaza a bit too much, we decided to go and explore more the surroundings, moving to the next church on the list.

Somehow in a back alley we suddenly heard a different rhythm of another band, and spotted some gathering at the end of the street. Atop of everybody we could see a huge religious statue sitting on a throne and surrounded by flowers on top of a heavy platform nicely ornated, carried by many men in purple robes who were coming slowly toward us. As soon as we approached the whole column, we could see more worshipers joining the procession, some curious people or believers waiting them on the sidewalks, or passing them by. The heavy platforms were carried by several men on their shoulders (known as Cargadores”or carriers) and were coordinated by a leader to stop from time to time. We waited in awe until the caravan just passed by to find few more caravans of similar outfits but different statues.

There were 5 in total, coming at a very slow pace, each of them celebrating a different saint from the history of Catholic life. Women wearing white lace veils were ahead of each heavy platforms burning incense.

With little history in other cultures, I found that Peru (beside some other countries of Spanish occupation) has developed traditions, like these processions, deeply rooted, coming from some ancient rituals. Being there in Semana Santa, or Holly Week, was our bonus to witness the religiousness of this part of the world, something new for us.

Trying to find a place to eat, we got lost on some other side streets, where the traffic got stranded due to another procession. Avoiding the crowd, we managed to get to a restaurant. Did we expect anything else than touristy food in a touristy area? Probably yes, that’s why our disappointment followed shortly after we tried some traditional dishes like Cheviche or Papa a la Hunacaina, and we left the Historic Centre of Lima soon, not before admiring the buildings and their style around the Historical Centre. 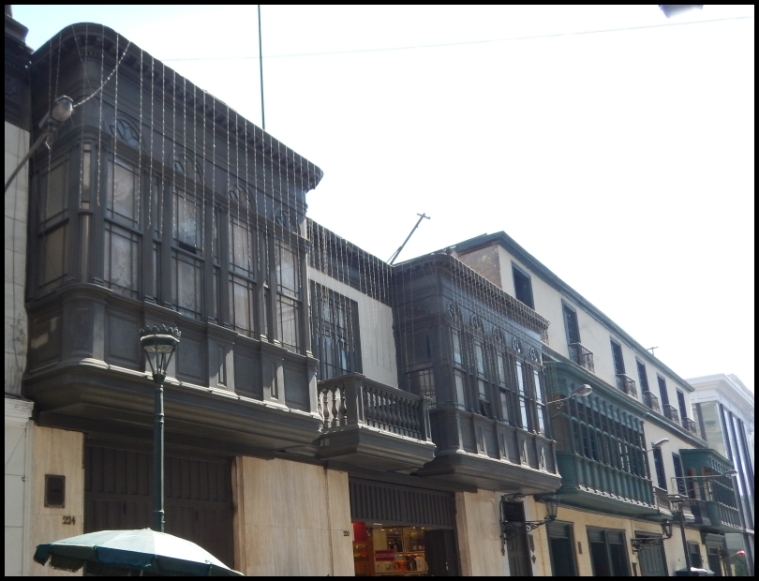 Too early to go to our next stop, we headed south at a slow pace. When we got on the Paseo de la Republica Avenue, we noticed on our right a huge park, where people seemed to enjoy the nature and the shade, sitting on the green grass or walking around. The park was so enticing that I immediately wanted to stop and lay down in the shade. Of course, the day was hot and the meal had to be digested. But we kept walking, and even though we could see some sort of gates, there was no entrance whatsoever. 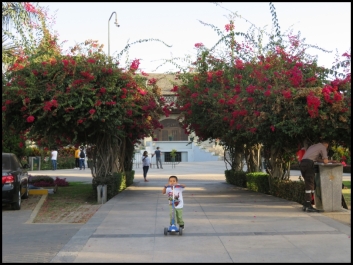 We had no other option than continuing our walk, until we got on Avenue 28 de Julio and happily found the entrance of Parque de la Exposicion. We didn’t have to walk too much, as we collapsed on a bench facing some beautiful trees. Even though there were so many people and children in the park.. hmm, that was actually a Sunday, and people didn’t have to go to work, nor the kids to school; the park was quite big, and while resting our feet, we did some bird watching. We just couldn’t refrain from doing bird watching, as the birds were everywhere! They are so familiar with people that I started laughing when two of them were walking so close around a lady who was laying down in the grass checking her phone, like no one was there.

Then my hubby spotted the first parrots on the top of a tree right in front of us. They looked like chameleons! Their feathers were so similar in colour with the tree’s leaves that one could hardly notice them if they were not moving around.

Delighted with our stop, we hardly wanted to leave the shade and the bench, but a traveler has to keep moving, and our last stop for the day Circuito Magico del Aqua was waiting for us.

Parque de la Reserva, completed in 1929, is located in downtown of Lima district, and it is home of many sculptures and water fountains, named of the Reserve in honor of the last soldiers who fought in the defense of Lima during the War of the Pacific. The Magic Water Tour completed in 2007 was originally criticized because of the costs and design, but with its 13 distinct fountains it is now one of the most important and largest fountain complex in the world and one of the most visited tourist attraction in Lima. The music, the lights and the water play can be best indulged after dark, when the park is getting animated and classical music is welcoming you at the main big fountain. The main shows are every hour after 7:15 pm, and for a small fee of 4 soles you can stay as long as you want, or walking around the fountains.

The circuit displays 13 fountains and the continuously changing colours make a beautiful show not only for tourists, but also for locals. Few of them have brilliant splashes for kids, who looked like having so much fun!

A colourful laser program is synchronized with classical and Peruvian music making the fountains to sparkle and shine, and the water flows in unique and special patterns and shapes. We could stare stupefied endlessly if the feet were not asking for their rightsJ It was getting dark, and the next day was waiting for us with new adventures.

* Always is good to carry small change with you

* Ask locals for help if needed, even if you don’t speak Spanish. The sign language is international, a smile is a heart opener, and Peruvians are very nice people, ready to help the tourists anytime.