Coming from Munising on County Rd H-58, we passed by the famous Log Slide Overview. The location was used originally in the 19th century by the local loggers to slide the logs from the top of the dunes to the base of the banks, to Lake Superior, in order to facilitate the transportation of timber from this area. Now this place is a wonderful spot to admire the blue and to lose yourself in an ecstatic reverie.

There is a little display on the way along the trail, of some of the tools used to carry and drag the logs. 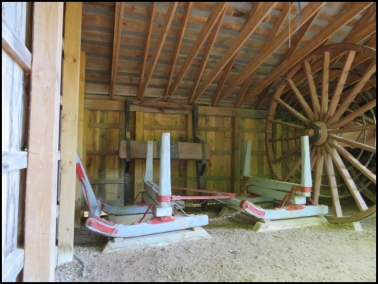 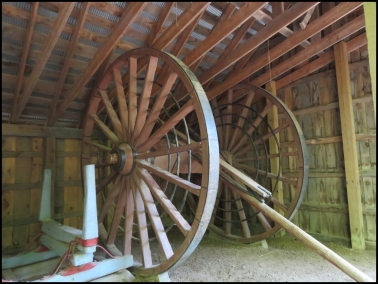 Grand Sable Dunes stretch over 10 km along the southern shore of Lake Superior. They are about 100 m height, and offer a unique view from both eastern and western side.

Climbing the dunes is not recommended, even though they are famous just for this reason. I didn’t dare to climb them, but I amused myself watching some teenager’s adventures down and up the hill. 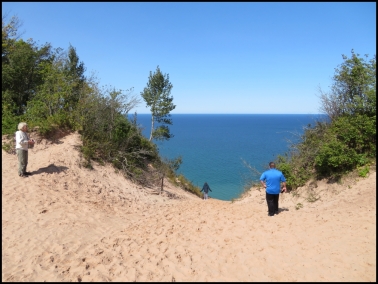 The path from the parking lot ends right on top of a big dunes, with a wonderful view of Lake Superior 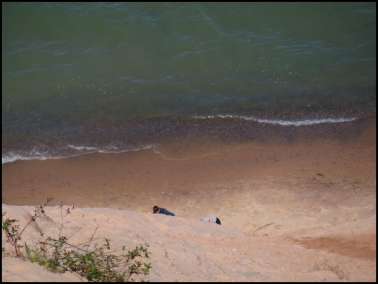 Jack pine trees can be seen at the top of these banks of sand, and scarce vegetation along the shore. Winds and water continue to shape these perched dunes that formed on top of the existing coastal bluff. 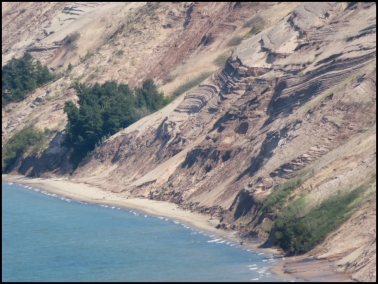 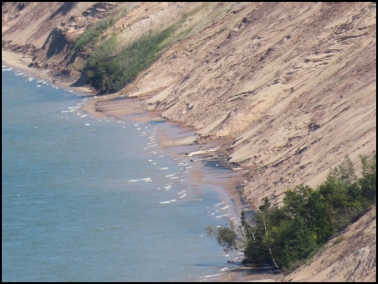 I was a little nervous when we got to Grand Marais, since our Airbnb host forgot to email us the exact address. We only knew the house is on the main street, in the center of the town. But where? we kept wondering. We knew the town is pretty small, and the plan was to drive around until we would find the house. If still not lucky, then to find a place with internet, to connect with our host. But going straight into the little downtown, we suddenly recognized the house on the left. We started laughing when we counted the number of the houses on the main street: indeed, there was no need for explicit details. No-one can get lost on this street: there were about 20 houses in totalJ 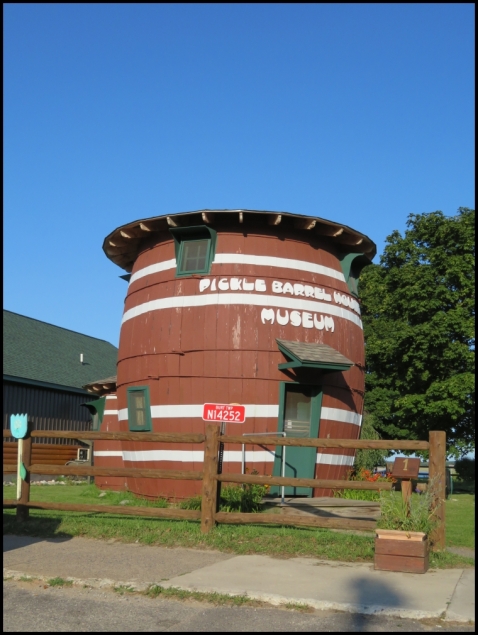 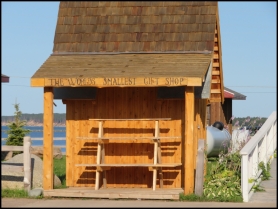 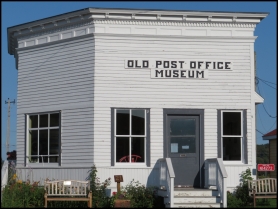 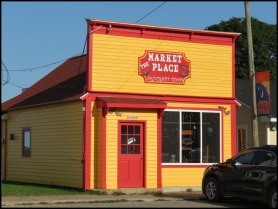 The eastern gateway to Pictured Rocks, Grand Marais, is a little community of 350 people or so, on the Southern shore of Lake Superior. Named by French after the large “harbor of refuge” on the East side, the first explorers saw the opportunity to dock in this area.  With the breakwater built and extended into Lake Superior, and with both Inner and Outer Lights, the bay offers a nice and safe harbour for all kind of boats. Both range lights are made of iron and bolted to the pier, and are still operational. 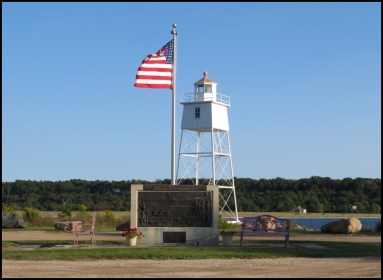 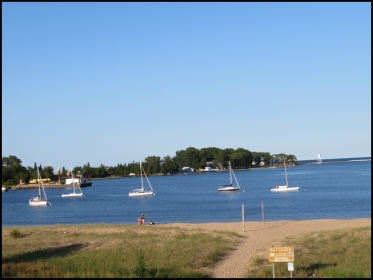 Bayshore Park with the Outer range lights in the distance

After checking in, we realized we still have plenty of time to visit the surroundings. After a short stroll on the local beach, we headed to Sable Falls. 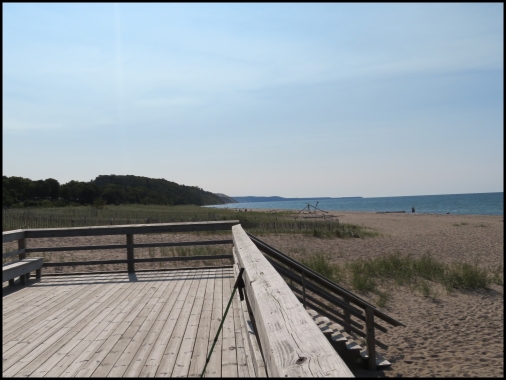 Grand Marais – walkboard to the beach 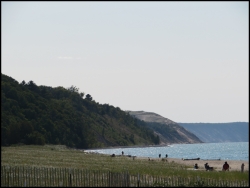 Grand Marais beach and a view to the Grand Dunes 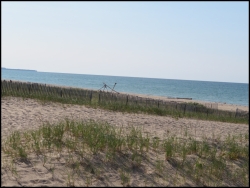 More dunes on the other side of the bay, and a forest of pine trees on the back of it.

Sable Falls, located 2 km west of Grand Marais tumbles down about 20 m over several cliffs, on the way to Lake Superior. There is a quick and easy access to the falls, even though there are about 169 stairs to the viewing platform, and then another short walk to the beach where the Sable Creek flows into the lake. 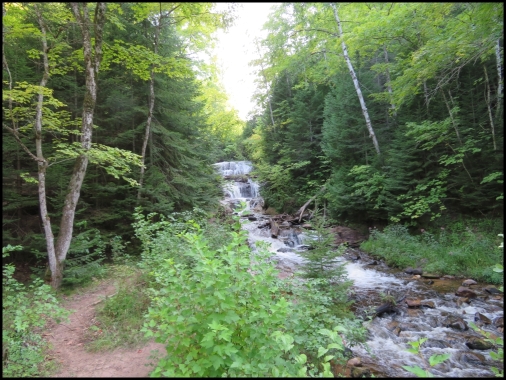 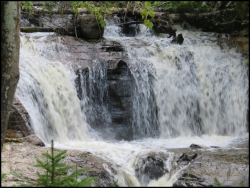 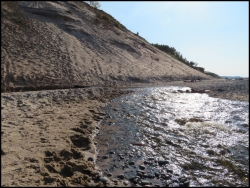 The 67 km shore on the Southern side of Lake Superior stretches majestically between Munising and Grand Marais. The lakeshore is full of wonders and mysteries, rocks and waterfalls, enchanting forests and trails, beaches and lighthouses. 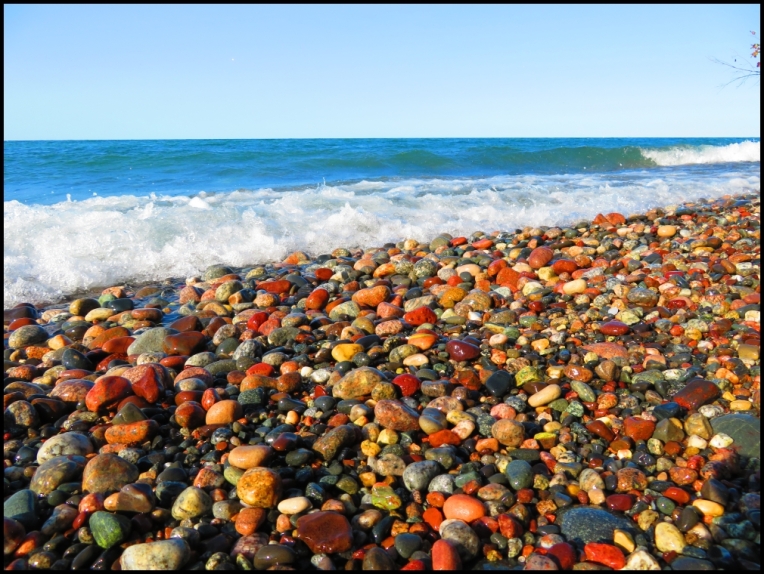 We’ve been so fortunate to be able to spend 3 days in this area of Upper Peninsula! The night I woke up in the middle of the night and looked outside, made me realized that I have never seen the stars being so close. The memories will always remain in my heart, as this was the place where I felt that I’ve touched the stars««