After a night spent in Greybull and a quick stop in Cody, the road took us from Devils Tower to Yellowstone National Park. It was still morning when we reached the East Entrance. The long lines at the entrance didn’t scare us, we were excited to get in the park. The Interagency pass we obtained at our first destination (Badlands National Park) let us move quickly once we had arrived at the booth. I didn’t really notice when the scarce vegetation thickened and became greener, and when the surrounding heights became elevated. 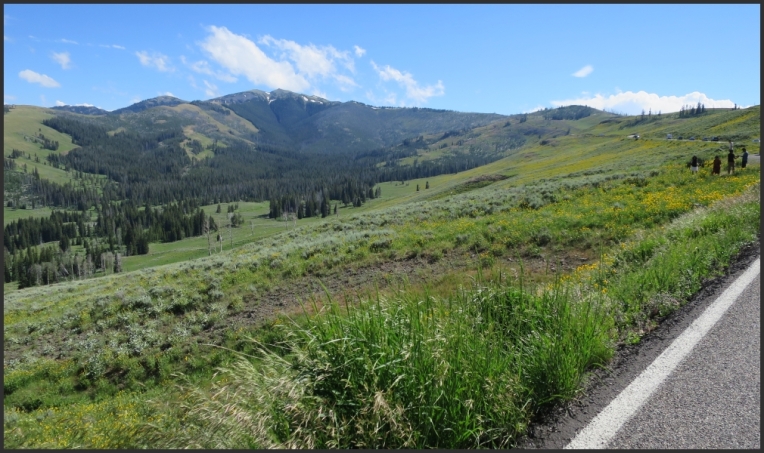 I only suddenly realized the snow covered peaks on both sides on the road when passing through the Sylvain Pass. Then I grew aware of the altitude we were at, as the pass goes at 2,600m above sea level and the peaks surrounding it are over 3,000 m.

I barely had time to absorb the beauty of the mountains before we quickly saw Yellowstone Lake in the distance, the largest body of fresh water above 2,100 m in North America. The name of Yellowstone Lake first appears on the 1839 maps of the Oregon territory.

Yellowstone National Park, established in March 1, 1872, is the world’s first national park. The 8,983 km2 park is widely known for the stunning views of canyons, rivers and mountain ridges, and for the wealth of wildlife. The park is mostly known for the geothermal features, for its geysers, mud pots, and hot springs. At the heart of Yellowstone lies volcanism. The central part of what is now the park is formed out of a huge caldera. The magmatic heat that powered the past eruptions (1.3 mil years ago, and 640,000 years ago) are still powering the park geysers, fumaroles and hot springs. There is a permanent monitoring of the rise and fall of the Yellowstone Plateau, as well as earthquakes caused by volcanic and tectonic actions. The good news is that the scientists maintain that they see no evidence of an eruption in the foreseeable future, even though there were 1,200+ earthquakes, part of the earthquake swarm, in the past 6 weeks.

As we noticed the different landscapes, from green to brown, with scarce vegetation or almost none at all, we learned the reason: a huge wildfire from 1988. Starting in multiple places from mid-June to mid-July, the fires were left first to burn out by themselves, as they normally are. However, the lack of rain and strong winds that summer made the fire to spread out rather than diminishing, and by the time the firefighters started to supress the fires (mid-July) it was too difficult to put them down. About 36% of the park was affected by the fire, and only the rain and snow fall in September 11 stopped its advance. The vegetation is now growing back; however, over 20-30 years are needed for a pine tree to grow 1 to 2 meters, and there are still huge areas where vegetation is barely seen.

Yellowstone is well known for its wildlife as well. Even though we didn’t see as much as we expected, we still had a chance to get some good sights. 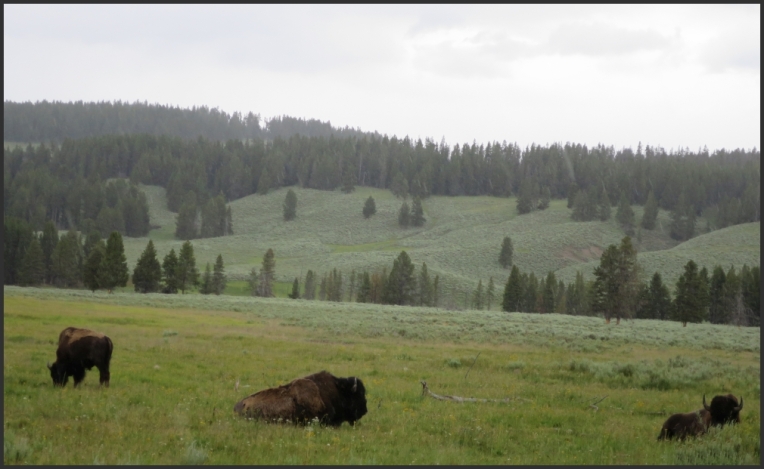 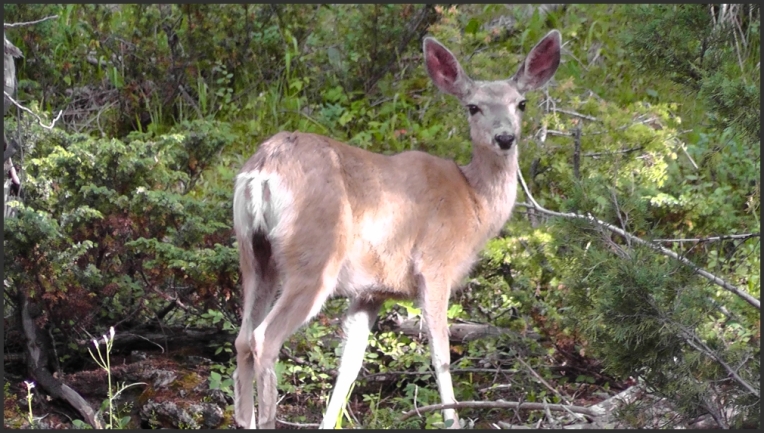 The park regulation requires that people need to stay at least 23 m from the wildlife (91 m from bears and wolves), for animal’s as well as the people’s safety.  But rules are not always followed. Bison are big, and one might think they are slow, but actually they can be quite fast. One of the bison in the picture below was actually charging at the bush, and the girls probably didn’t realize how close they were, since at the time we left, they were still approaching, a small step at a time. The bison were relatively close to the road, anyone could take good pictures of them, so why risk your life?

But the main attraction of the Yellowstone NP is The Grand Canyon. The canyon varies from 240 to 400 m in depth and from 500 to 1300 m in width. Its length is about 39 km, though the upper 4 km is the most colorful section. Hot spring activity has continued through the ages, altering the lava rock to produce various colors due to the iron compounds.

The most scenic view is Lookout Point (or Artist Point) where the lower falls are steaming in the distance and the rapids of the Yellowstone River creates an exquisite and breathtaking view of the canyon.

Here we were struck by the lovely colors of red to yellow and all other shades in between, including green and black.

The crowds coming here to see this magnificent place make a noise comparable with the one of the Upper Falls, but who can blame them? It is so beautiful, and I had such ecstatic feelings that I could hardly leave the place.

12 thoughts on “US, Wyoming: Heights and highlights of Yellowstone NP”