Pondering over the idea to cross a long bridge got buried at the bottom of my thoughts. I stopped thinking at such thing a long time ago, when the chance to cross a real one (not only in my imagination) came suddenly; so I took it without even thinking.

I have never imagined or searched information about how long the Confederation Bridge is, not that I have heard before of that, the one that links New Brunswick to PEI. However, when I started crossing it, I almost forgot to breathe; I couldn’t believe that one could not see the actual island, and started wondering if the bridge even goes somewhere.

It’s only after few kilometres when I began seeing the island, far away in the distance. One is simply stunned at this prodigy, at this piece of marvel.

And after those 12.9 km of bridge are close to an end, then I actually started seeing the coastline, the renowned Red Sand beaches, wondering if this is because the sea has washed the shore for so long. 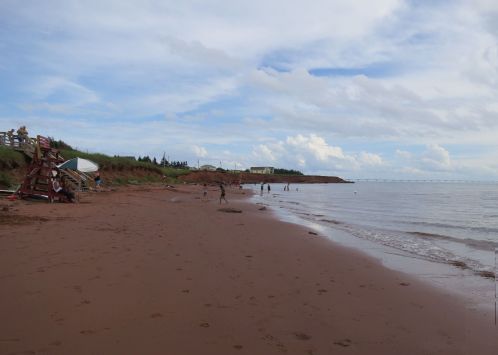 Once the bridge has come to an end, I got the feeling like landing in a new country. No, it’s not Narnia, nor Neverland; it looks familiar, but also so different.

Turning to the right at the first intersection, I realized what’s so special about this land. The thought that my eyes make me trouble was just confusing. I don’t know what is more pressing on my brain: the red or the green, the peacefulness or the quietness of these lands.

The car kept moving in that glorious afternoon of August through these red lands with potato and corn crops on both sides of the road, and after a while it hit me how empty and soothing these places were. The seldom houses hidden by some trees or bushes left me with an impression of a deserted land, but the beautiful and neatly crops proved the contrary. 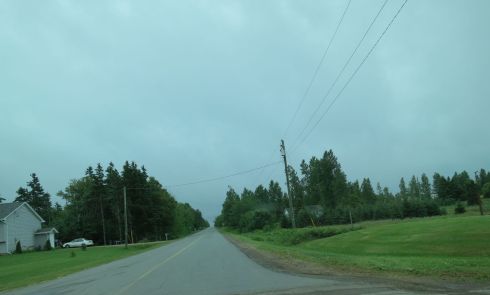 I realize now that this forgotten and neglected humanity is just the same place as it was 100 years ago, and the peaceful vibe in the air made me realize how serene the whole place is.

Lingering my eyes on the window, I started feeling Lady August beckoning at us, and I devoted my entire emotion to her direction. I could see how Miss July is rustling her skirts behind the trees, and heard far in the distance how youngsters April and May never stopped playing hide and seek. But the thrill of this sensation came from Missy June, who has never failed to start such an exquisite show of the nature, seducing us through our inner self.

Stranger on a strange island, I felt the shining sun following us step by step, I saw the trees and branches bending over another and whispering in their own language. The rustling was alluring us, also the sun, the breeze, the ground, the sky. One could see we didn’t belong to the place, and the place didn’t belong to us. We were just some passengers moving along on their own way.

Leaving a slightly busier area, Cavendish, one can think once again how idyllic and sweet, and simple, and beautiful this place is. The greenery is simply dressing the place, the simplicity is stunning. But what was surprising for us was the feeling we got in this place, how we felt like a child again, wanting to run and play with flowers, chasing the cats and the dogs around the house, caressing the horse and playing in the buggy, pretending we’re cooking dinner in our own kitchen. I felt like these new thoughts that came to our mind from nowhere belong to us, and I suddenly started feeling like belonging to this place.

We know, now, that, in this transcendental land we have found our peace of mind, our harmony, we felt the call of the nature and we have given our emotions back to the nature. All excitement has been transformed into peacefulness, and all the thrills into tenderness.